WFMU DJ and veteran music writer Jesse Jarnow draws on extensive new firsthand accounts from many never-before-interviewed subjects and a wealth of deep archival research to create a comic-book-colored and panoramic American landscape, taking readers for a guided tour of the hippie highway filled with lit-up explorers, peak trips, big busts, and scenic vistas, from Vermont to the Pacific Northwest, from the old world head capitals of San Francisco and New York to the geodesic dome-dotted valleys of Colorado and New Mexico. And with the psychedelic research moving into the mainstream for the first time in decades, Heads also recounts the story of the quiet entheogenic revolution that for years has been brewing resiliently in the Dead's Technicolor shadow.

Featuring over four dozen images, many never before seen-including pop artist Keith Haring's first publicly sold work-Heads weaves one of the 20th and 21st centuries' most misunderstood subcultures into the fabric of the nation's history. Written for anyone who wondered what happened to the heads after the Acid Tests, through the '70s, during the Drug War, and on to the psychedelic present, Heads collects the essential history of how LSD, Deadheads, tie-dye, and the occasional bad trip have become familiar features of the American experience. 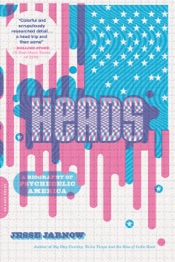