Meet the series that's sweeter than tea and hotter than an Alabama summer day!

In this three-book collection of hot cops, known as the Moonshine Task Force you'll get an age-gap surprise pregnancy, a second-chance romance, and a marriage of convenience.

Renegade - When older-woman, Whitney, allows herself a one-night-stand with her younger brother's best friend, neither one expect for it to have life-long consequences.

Tank - EMT Blaze is heart-broken when she responds to one of the worst car accidents she's ever seen. Everything changes when she realizes the man inside is the one she's never been able to forget.

Havoc - Team leader, Havoc, can't stand to see the despair in Leighton Strather's eyes when he's forced to arrest her. It hits him so hard in the gut, he knows the only thing he can do to protect her from her family, is marry her. 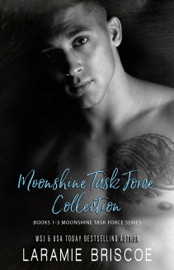