Raccoon on the Moon is an adventurous story about a guard dog named Bad that scares off a pesky raccoon.

School Zone’s Start to Read! series helps children learn to read by presenting interesting stories with easy vocabularies. Words are repeated. Sentences are short. Rhyming words help children increase their vocabularies. Meaningful clues in the illustrations are abundant. After several readings with a partner, the child should be able to read alone. Most of all, the reading experience should be enjoyable.

Most of the vocabulary words in Raccoon on the Moon are typically introduced in first grade and second grade. The words porch, waddle, knock, kitchen, guarded, yard, and sneaked are higher-level words. You may need to help your child sound out these words. 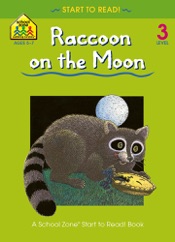