L.E. Modesitt, Jr.'s Scion of Cyador continues his bestselling fantasy series the Saga of Recluce, which is one of the most popular in contemporary epic fantasy.

Having survived an extended stint fighting both barbarian raiders and the giant beasts of the Accursed Forest, Lorn has proven himself to be a fine officer . . . perhaps too fine. Too much success has made him a marked man with rivals and enemies. When he returns to his home, both he and his young family become targets while all of Cyad is in upheaval over the death of the Emperor.

“An intriguing fantasy in a fascinating world.”—Robert Jordan, New York Times bestselling author of The Wheel of Time® series

Other Series by L.E. Modesitt, Jr.
The Imager Portfolio
The Corean Chronicles
The Spellsong Cycle
The Ghost Books
The Ecolitan Matter

At the Publisher's request, this title is being sold without Digital Rights Management Software (DRM) applied. 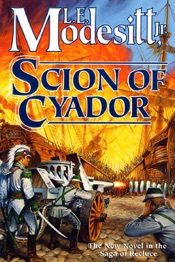 Top Reading The Dare A Court of Mist and Fury Love's Treasure - A Christian Romance Collection Limited Edition Million Dollar Demon Strict Confidence It Ends with Us The Silent Patient Comfort & Joy A Love Song for Rebels The Judge's List The Seven Husbands of Evelyn Hugo Hand Me The Reins Knocked Up: A Secret Baby Romance Collection Wildflower Graves The Au Pair Enemy at the Gates