Just as the beat of a butterfly’s wings is said to cause hurricanes on the other side of the world, so the affairs of tiny Eritrea reverberate onto the agenda of superpower strategists. This new book on Africa is from the author of the critically acclaimed In the Footsteps of Mr Kurtz.

Eritrea is a little-known country scarred by decades of conflict and occupation. It has weathered the world's longest-running guerrilla war, and the dogged determination that secured victory against Ethiopia, its giant neighbour, is woven into the national psyche. Fascist Italy wanted Eritrea as the springboard for a new, racially-pure Roman empire, Britain sold off its industry for scrap, the US needed headquarters for its state-of-the-art spy station and the Soviet Union used it as a pawn in a proxy war.

Michela Wrong reveals the breathtaking abuses this tiny nation has suffered and, with the sharp eye for detail that was the hallmark of her account of Mobutu's Congo, she tells the story of colonialism itself. Along the way, we meet a formidable Emperor, a guerrilla fighter who taught himself French cuisine in the bush, and a chemist who arranged the heist of his own laboratory. An arresting blend of travelogue and history, ‘I Didn't Do It For You’ pierces the dark heart of our colonial history.

Praise for I Didn’t Do It For You:

‘Contemporary history on the grand scale. I was entertained, informed and angered. Wrong has given us another essential contribution to the post-colonial scramble for Africa.’ John le Carre

‘Vivid, penetrating, wonderfully detailed. Michela Wrong has written the biography of a nation and more – she has excavated the very heart and soul of the Eritrean people and their country.' Aminatta Forna

‘If you thought Eritrea was some exotic flower you heard mentioned on a gardening programme this book will tell you something different. It tells the tale of a small group of Africans so despised and trampled by successive foreign occupations that they fought back and after 30 years of war, they became a nation. It is an astounding story packed with tales of the worst – and the best – of human behaviour.’ Richard Dowden, President of the Royal African Society

'This is a wonderful, readable and illuminating book. Michela Wrong is an enormously talented writer…thoroughly researched and deeply engaging and honest.' Clare Short – New Statesman

'Impressive … Wrong offers an uplifting testament to the resilience of the human spirit. Eminently readable and full of fascinating detail, this is a book that deserves and needs to be read' Guardian

'[A] corker … fascinating and tragic. Wrong's writing flows so smoothly that it is only after 100 pages or so that you notice how much legwork she has put in [and] she tracks down a startling array of characters' Daily Telegraph

Michela Wrong has been a foreign correspondent since joining Reuters after University and has worked extensively in Africa for the BBC and has also worked for the Sunday Times. She now writes for the Financial Times 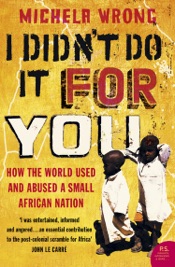