The first single-volume history of India since the 1950s, combining narrative pace and skill with social, economic and cultural analysis. Five millennia of the sub-continent’s history are interpreted by one of our finest writers on India and the Far East. This edition does not include illustrations.

Older, richer and more distinctive than almost any other, India’s culture furnishes all that the historian could wish for in the way of continuity and diversity. The peoples of the Indian subcontinent, while sharing a common history and culture, are not now, and never have been, a single unitary state; the book accommodates Pakistan and Bangladesh, as well as other embryonic nation states like the Sikh Punjab, Muslim Kashmir and Assam.

Above all, the colonial era is seen in the overall context of Indian history, and the legacy of the 1947 partition is examined from the standpoint of today.

‘A delight… one of the best general studies of the subcontinent’
Andrew Lycett, Sunday Times

John Keay is a writer, broadcaster and historian whose books include INTO INDIA, INDIA DISCOVERED, WHEN MEN AND MOUNTAINS MEET, HIGHLAND DROVE, THE HONOURABLE COMPANY: A HISTORY OF THE ENGLISH EAST INDIA COMPANY, THE GREAT ARC and (with his wife Julia) the COLLINS ENCYCLOPAEDIA OF SCOTLAND. He has travelled extensively in India and the Far East, and specialised in Asian history and current affairs. 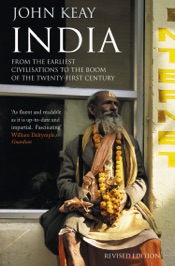 Top Reading Wrapped in Love SEALs of Shadow Force: Spy Division Books 1-3 A Gentleman in Moscow Love with a Perfect Cowboy Inventing a Nation The Russian Send for Me Where the Crawdads Sing The Escape Room Bridgerton Collection Volume 1 Greenlights The Blessing Way On the Way to the Wedding The Princess Spy The Four Winds Orderly and Humane