A Record of Cambodia: The Land and Its People
Zhou Daguan

Translated, with an introduction and notes, by Peter Harris

Only one person has given us a first-hand account of the civilization of Angkor. This is the Chinese envoy, Zhou Daguan, who visited Angkor in 1296–97 and wrote A Record of Cambodia: The Land and Its People after his return to China. To this day Zhou’s description of the royal palace, sacred buildings, women, traders, slaves, hill people, animals, landscapes, and everyday life remains a unique portrait of thirteenth-century Angkor at a time when its splendors were still intact.

Very little is known about Zhou Daguan. He was born on or near the southeastern coast of China, and was probably a young man when he traveled to Cambodia by boat. After returning home he faded into obscurity, though he seems to have lived on for several decades. Much of the text of Zhou’s book seems to have been lost over the centuries, but what remains still gives us a lively sense of Zhou the man as well as of Angkor.

In this edition, Peter Harris translates Zhou Daguan’s work directly from Chinese to English to be published for the first time. Earlier English versions depended on a French translation done over a century ago, and lost much of the feeling of the original as a result. This entirely new rendering, which draws on a range of available versions of the Zhou text, brings Zhou’s many observations vividly and accurately back to life. An introduction and extensive notes help explain the text and put it in the context of the times.

“Peter Harris has given a new generation of readers a masterly version of Zhou’s timeless and fascinating account that scholars of Cambodia are sure to relish and visitors to Angkor are sure to enjoy.”—David Chandler

Peter Harris is Senior Fellow at the Centre for Strategic Studies: New Zealand in Victoria University of Wellington. 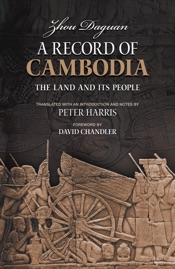